The castle of Orava

The castle, which was a fortified settlement for a long time, rises above the village of Oravský Podzámok. It was built at a strategic place of the Hungarian-Polish road near the customs house in Tvrdošín. It has been a regional castle since 1370. The castle was built on a rock and comprises three parts (terraces) – the lower, middle and upper castle. The building process lasted from the half of the 13th century to the early 17th century. There was a lively military and social life in the middle ages, when the castle was owned by Peter Komorovský and Ján Korvín but also under the reign of the Thurzo family.

Rebelling peasants led by Gašpar Pika seized control of the castle for some time in the second half of the 17th century. However, the uprising was militarily suppressed and its leaders as well as the peasants were punished. The castle was burnt down in 1880. After several reconstructions, the Museum of Orava was established here in 1953. Its staff introduces the history of the castle in an uncommon way. An extraordinary tour at the castle, which shows creatures of the past and the art of craftsmen, is held in May. Celebrations of the Museum Day include a demonstration of historical swordplay and folk dance. Children may look forward to a competition for a court jester.
For the courageous ones, a night tour with artificial lighting and various attractions is held several times a year at the castle of Orava. The Festival of amateur-actor theatre companies is organised here, too. 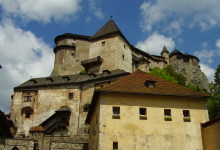